All the Spokane food-related stuff that I can't figure out how to wedge into my other blog.

My buddy Glen and his wife, Christa have a crazy packed tiny garden. He brought me some of their peppers and tomatoes the other day. This recipe is your standard roasted salsa number... nothing going on special here, but as I made it, I was struck by how damn easy and forgiving it is. This time of year, when fresh tomatoes are everywhere, it's easy to make great food for every meal.

For example, dig this roasted tomato pasta sauce that I *thought* I invented until I saw a similar method in some magazine a year or so ago. 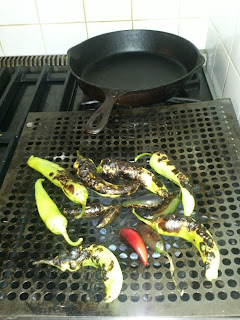 Start by charring your peppers. This silly grill grate thing is excellent on the gas stove top for peppers. Once charred, put them in bowl and cover them with plastic to sweat. 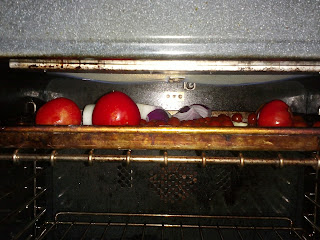 Then broil your tomatoes, garlic, and a couple onions. 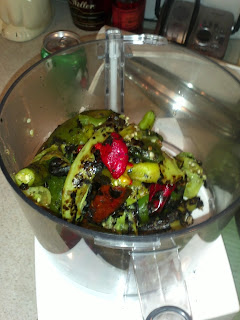 Meanwhile, pull the stems (but not the seeds) off the peppers and scrape/pick/peel off the charred bits that come off easily. Toss them all in the food processor. 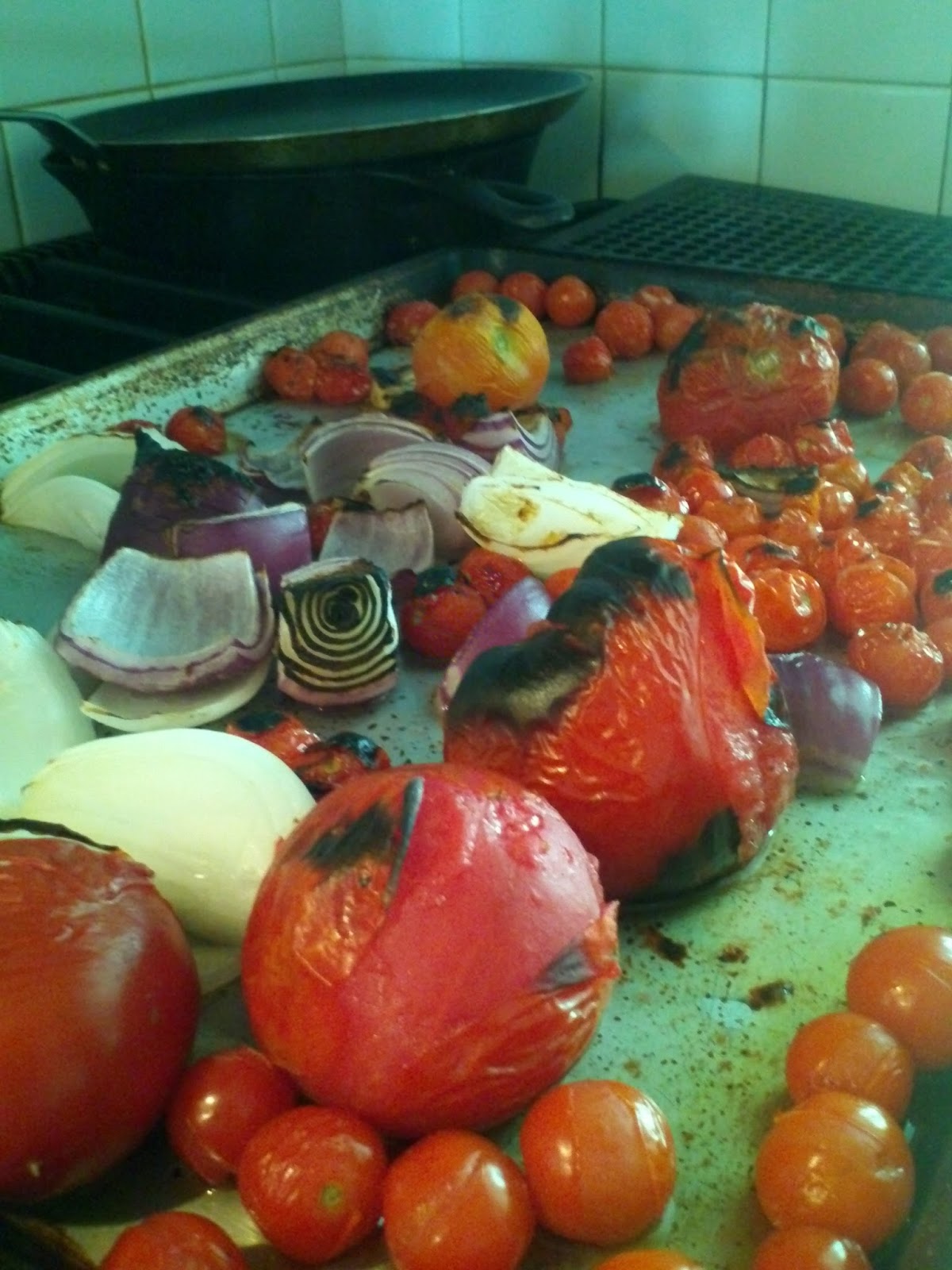 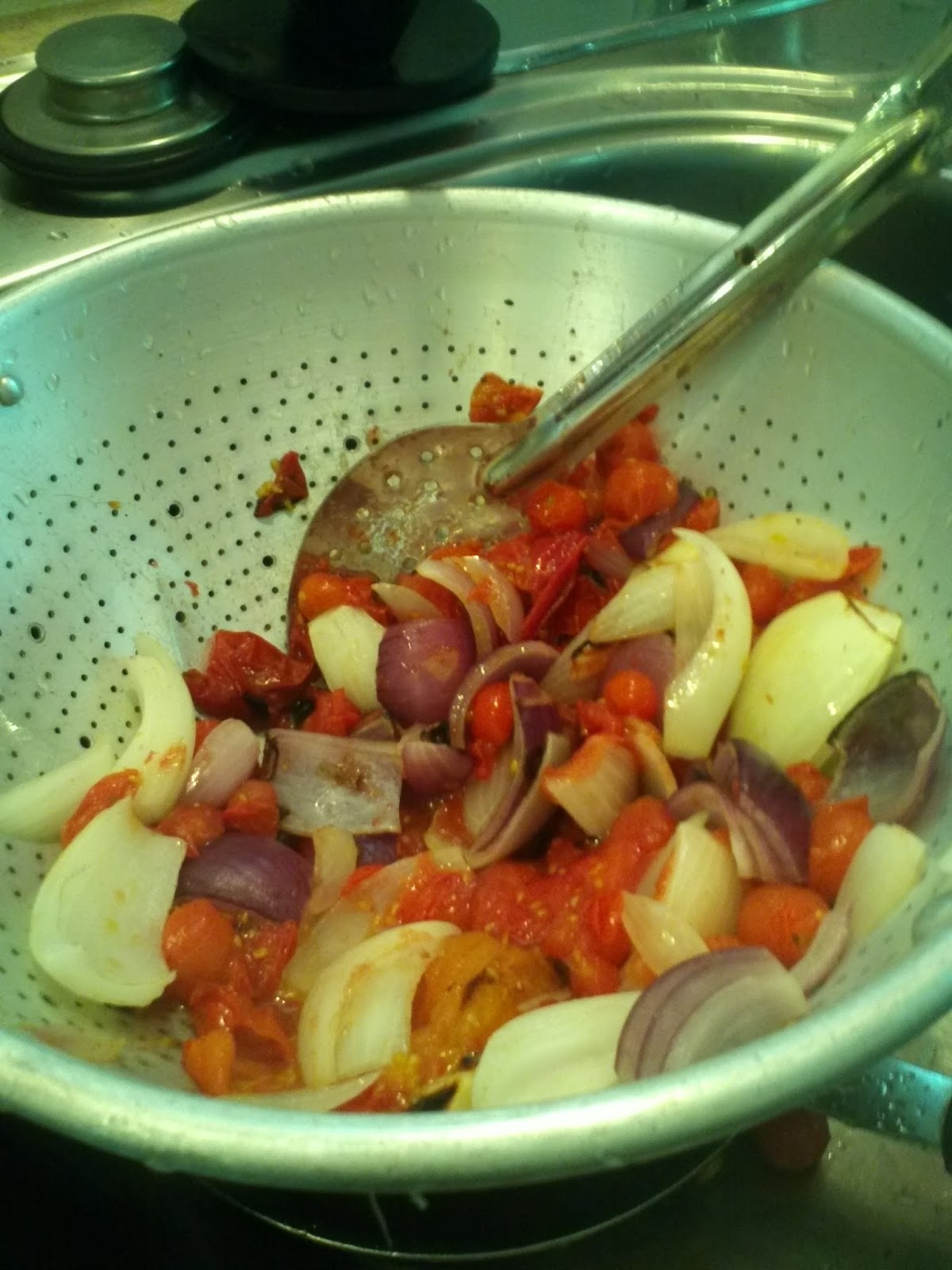 I press out the liquid from the tomatoes. Otherwise, you end up with a very soupy salsa. If I ruled, I'd save that charred tomato liquid for some brilliant thing. 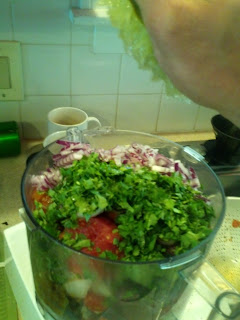 Toss it all in the food processor. You gotta have cilantro. I happened to have a 1/2 a lime to juice and some chopped red onions too -- so that went in too. 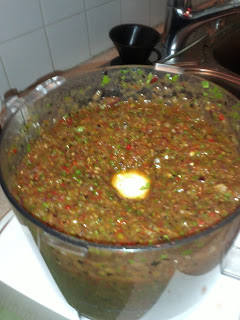 Process it until it's done. Salt and pepper and you're good to go. If I did it again, I'd add some fresh jalapeno and/or habanero for that distinctly fresh pepper heat.
Posted by John Speare > 7:09 PM 0 comments

We often have pinto beans going in the crockpot. We're big fans of pinto beans. We also love black beans, which also work for this breakfast, but pintos are better.

This is a super simple breakfast that I make all the time. The recipe I outline here is sort of the baseline. A guy could add all sorts of stuff to make it their own. 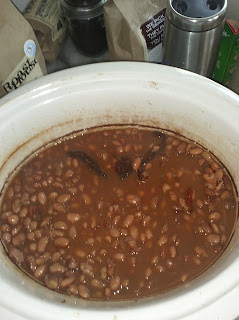 You can use canned beans to make this super easy and simple, but making pintos in the crockpot is so easy and cheap and yummy that it's hard to dump beans out of a can.

For the beans: We take 2 or 3 cups of beans and cover them with water by an inch or so and let it soak overnight. I usually throw a couple dried peppers in there too.

The key to great beans is not to dump out that soaking water. Seriously. Don't do it. You may need to add a bit of water, but don't dump any out. Cook on High for a couple hours, then turn it to Low until they are tender. 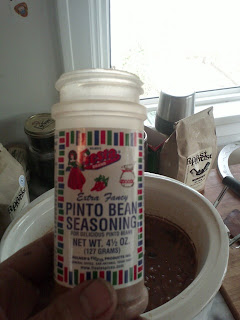 Be sure to season/salt after they cook. Not before. We like this "Extra Fancy" seasoning stuff. It's cheap and it's in the Mexican section and there's no MSG. What's not to love? 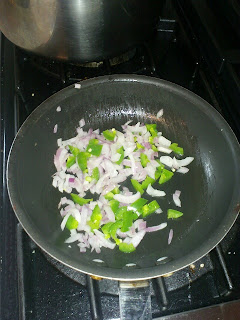 Chop up some jalapeno and onion and saute them in a pan with a bit of olive oil. You could throw in some garlic if you're into that. Or maybe a bit of habanero. Saute it until it's soft. 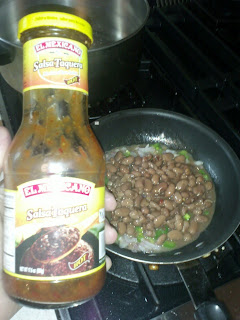 Add about 1/2 to 3/4 cups beans and some salsa. The taquero-style sauces are my favorite for this dish. You want lots of liquid going since you'll be sort of boiling/poaching the eggs. 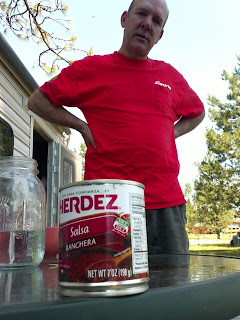 Here's Joe pondering my current favorite salsa. I friggin' love this stuff. But looking at the Herdez site, now I want to find the Arbol sauce. Damn, I bet that's good too. 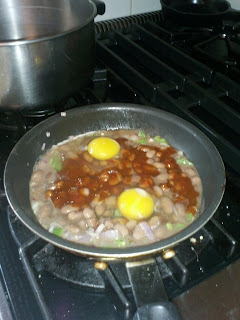 Plop the eggs on there and cover to poach/steam/boil. 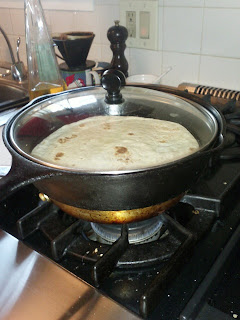 I use a cast iron pan to cover the eggs. This works as a tortilla warmer too. Genius, right?

You can put some cheese on there for melting.

Cook until the egg jiggles, or not, to your liking. Cover with gobs of Valentina sauce and sop it all up with the tortilla: Grub, with a capital G. 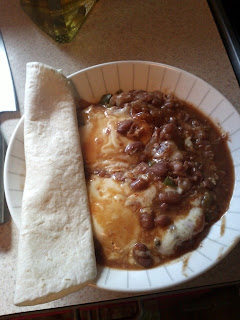 Fried eggs are good. Fried eggs with jalapeno are gooder. 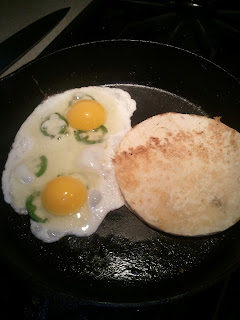 I want to think that I invented this. Of course it's been done. How could it not have been done before?

This is a fine, fine meal. For breakfast or perhaps very late night.

Saute some fresh, sliced jalapenos in a bit of olive oil for a minute or so. Then crack the eggs on top of them. Flip 'em for o'er easy or what moves you. 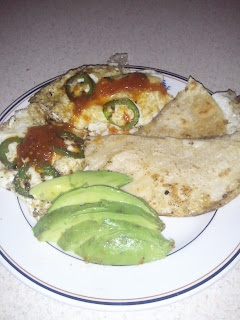 Small and stiff spatula wins the coveted Tool of 2012 Award !

We interrupt the normal nothingness here to bring you exciting news! 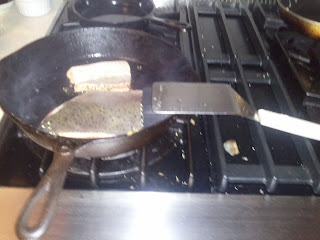 Man I love this spat. I use every single day.

It's especially useful when coupled with a cast iron pan.

Armed as such I am invincible!

As for cast iron pans: I found a stack of these rusted suckers in a junk pile at the river. I'm methodically reviving each one... This is Number 2. Number three is in the dirt of our side yard, awaiting its Phoenix-like transformation. 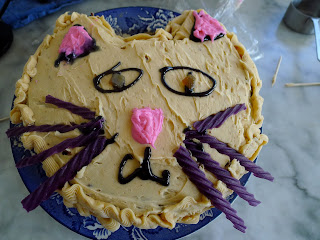 The chocolate and butterscotch combo made this cake a winner. This was literally the best cake I've ever eaten. Nice flavors and colors for fall. Start with a simple round and bake with your kids or grandkids to cut away and create and shape. Candy easily can substitute for fancy icing details.

If you have a pastry bag and tips, go crazy. I think we could have had fun making fur with the icing, but for Maddie's first attempt, we tried to keep it simple.
Posted by liza > 7:15 AM 0 comments

We switched jobs around here since the last time we posted stuff. We're bringing in way less money now -- which isn't a bad thing, since we're happily doing new work -- but, it has impacted our high-flying, high-roller lifestyle when it comes to the food budget. This new scheme really suits our true natures. We're both into deals.

So, while we are looking to save a bunch of money every month on our food budget, it's not at the expense of quality. Really: it just means that we're not going out much. I used to go out for just about every meal, every day: definitely breakfast and lunch, and often dinner. Now we make everything. Just doing that, even while buying fancy organic free range grass fed well adjusted meat, makes all the difference.

So, expect to see some cheap, but good stuff here. 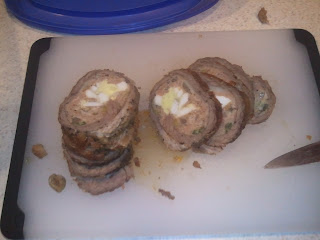 First one is a John version of my mom's Braciole. Mom's recipe calls for all sorts of high-zoot stuffing (pecorino, soprasata, ground veal, etc). I swapped out ground pork sausage and swiss. Next time, I'll leave the swiss cheese out and add a layer of hearty greens and some chicken liver. And I'll probably get non-seasoned ground pork and put some dried porchinis, Cognac, and my own spices in there.

We had sage, but no parsley. And instead of the stock-based braising sauce, I just used some fresh marinara -- that hadn't been cooked down/thickened yet.

Good stuff. My mom would approve. As she would say, "make it your own!"

This is good as a main dish, but it's friggin' crazy awesome as a sandwich filling the next day with some spinach, mayo, and jalapenos.

I used beef round, which is generally a pretty useless cut of beef. But it was on sale at Super 1 for $2.48/lb! Word. I got one dinner out of this and 4 lunches. I figure I was in it around about $13. Not bad.

Anyway, for the round: cut it thin and pound it out. Let it rest. Then pound a bit more. Use string to tie these guys up. 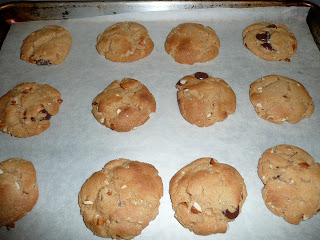 I posted on FB about a recipe I found for a flourless "cookie." Then famous Spokane biker, Charlie Greenwood pointed me to these flourless cookies, which blew my recipe out of the water. I've made a batch weekly for 2 weeks and am about to make a 3rd batch for a baby shower this weekend.
I've used chopped almonds but would like to try peanuts and walnuts. I also reduced the sugar 1/2 C of sugar, maybe a T less than the 1/2 C. You might even be able to do less for a more savory cookie. Try these cookie, whether you are gluten-free or not. They are chewy, moist and remain that way for a few days, delicious and pretty nutritious. Also very easy to make--one bowl, no need to get the mixer out to cream the butter and sugar.
Here's where you'll find the recipe for Almond Butter Cookies. Feel free to use peanut butter like I did or other nut butter.
If that link dies, here's the recipe:
Ingredients
Makes about 2 1/2 dozen cookies
1 cup almond butter (or peanut butter)
1/2 cup light or dark brown sugar
1/2 cup granulated sugar
1 large egg
1 teaspoon baking soda
2 tablespoons maple syrup
1 teaspoon vanilla
Pinch of salt
1/2 cup slivered almonds
1/2 cup semisweet chocolate chips
Method
Preheat oven to 350 degrees.
Grease a baking sheet with butter and set aside.
In a large bowl, stir almond butter and sugars together until well combined.
Add egg, baking soda, maple syrup, vanilla and salt and mix well. Stir in the almonds and chocolate chips.
Using a teaspoon, scoop out small, walnut-sized amounts of dough and roll them in your hands to form a ball. Place on cookie sheet about 1 inch apart. Bake 10 to 12 minutes, until lightly browned. Cool for 5 minutes.
Posted by liza > 10:01 AM 0 comments